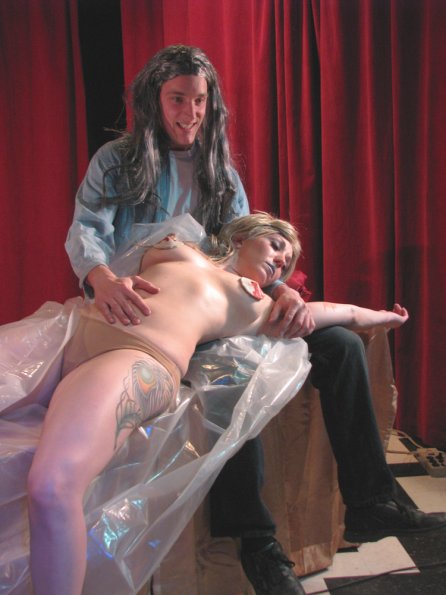 April 12th’s special Twin Peaks themed session with Viola Van Wilde of Gilded Lily Burlesque was EASILY one of the best sessions we’ve ever had.  You probably don’t know this, but this session has been planned for over a year.  When we first moved to the WindUp Space and were discussing the ins and outs with Russell, one of the first things he said was, “Hey, uh, is there a chance you could do a Twin Peaks themed session next year when we do our Lynchfest?  Ummm, have you seen Twin Peaks?”

Oh, little did he know.  If you’ve not seen Twin Peaks, you should.  Yes, it’s obscure, but basically, Twin Peaks was the Lost, Firefly, or BSG of its era.  I’m not going to belabor the point, but if you’re looking for a good yarn, Google it, you can watch it online for free with a little digging.

Anyways…we had donuts and some “damn good cherry pie” from Fenwick Bakery!

To be honest, we came pretty close to eating all of them before any of you showed up.  We’re good, moral, upstanding folks, though, so, err, we didn’t.

(This Monday though is going to be even sweeter….Sweet Sin Bakery is sponsoring Miss Cherry Delight’s session with free cupcakes!  Don’t be late, they’ll go fast.)

In any case, take a gander at sexy Log Lady, Viola Van Wilde.

Sheriff Harry S. Truman: “We call her the log lady.” 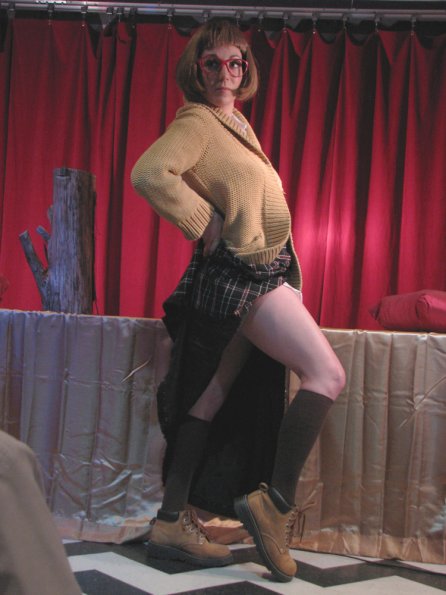 Log Lady: “Dark. Laughing. The owls were flying. Many things were blocked.”

(Well, in this case, the owls were blocking two things. Otherwise, we’d all get arrested.) 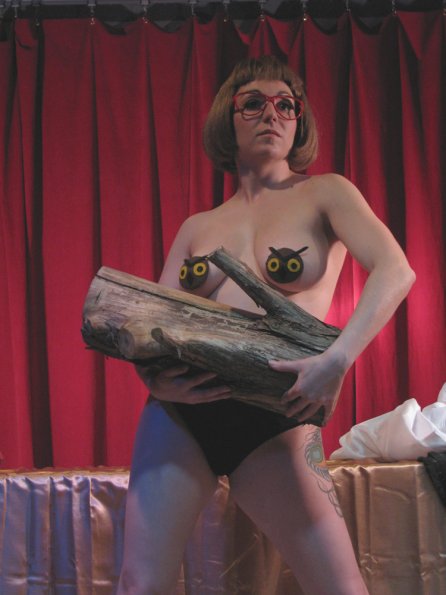 The Giant: “The owls are not what they seem.” 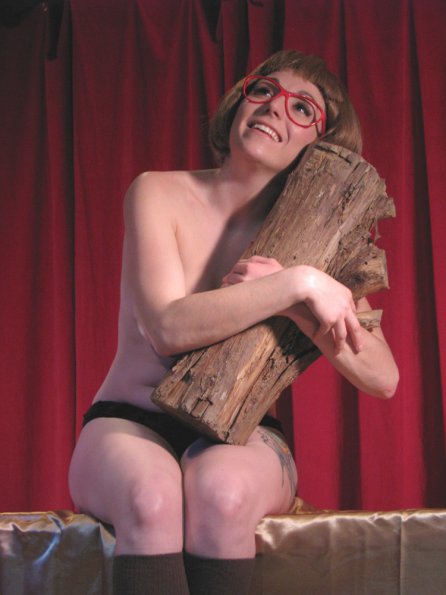 BTW, those have to be the coolest pasties ever.  (Or, as Russell said, “Nice hooters!”)

Viola’s next outfit was the sexy Audrey Horne.  Not only was she holding an amazing pose, but while doing so, she secretly tied the stem of a maraschino cherry into knot, which is how Audrey was able to infiltrate the bordello, One Eyed Jack’s, in Twin Peaks. 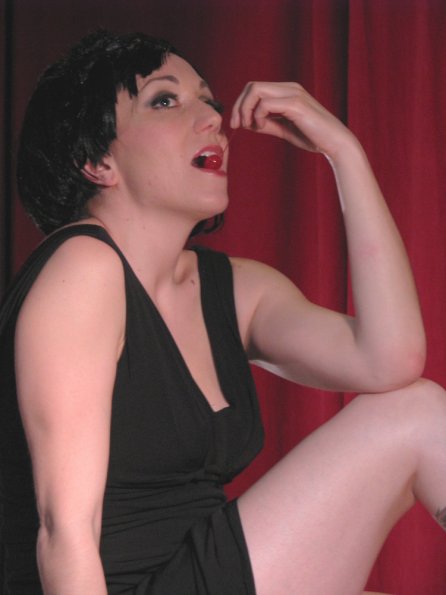 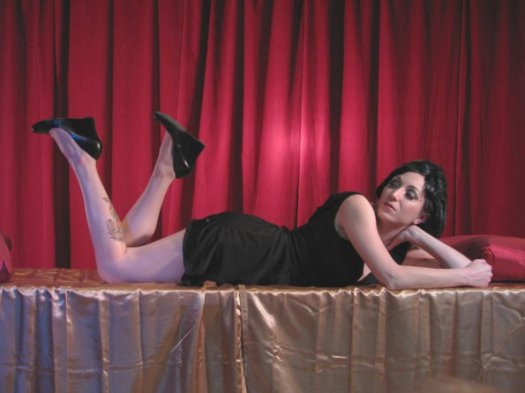 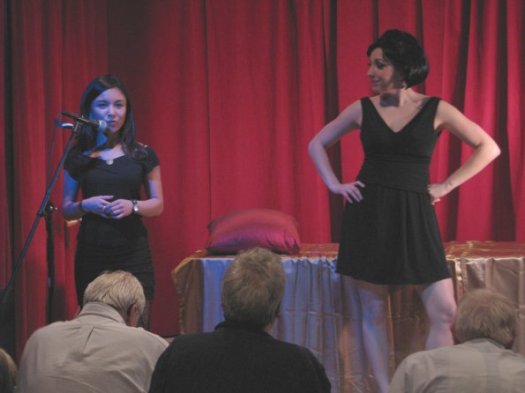 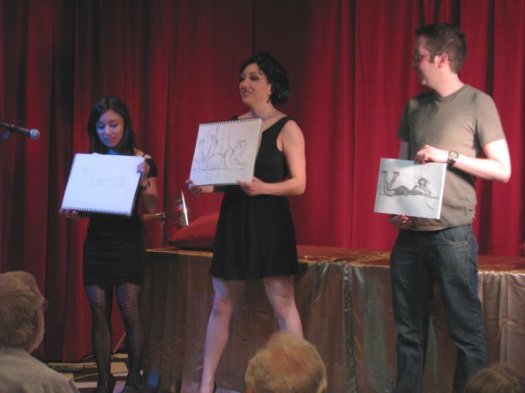 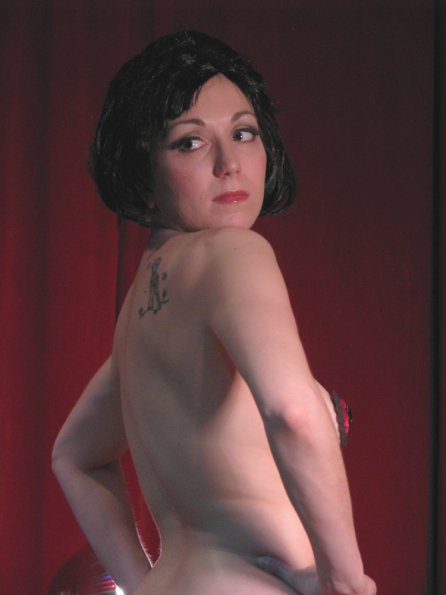 Our first contest was the opposite hand contest, where if you’re left handed you draw with your right, and if you’re right right handed you draw with your left, and if you’re ambidextrous you should . . . I don’t know, email me some jokes, cause, I’m running out of clever things to say in this portion.  The two winners got some sort of mystery concoction from Russell.  Lord knows what was in it.

Pete Martell, upon finding the murdered Laura Palmer in the opening scene of Twin Peaks: “She’s dead . . . wrapped in plastic.” 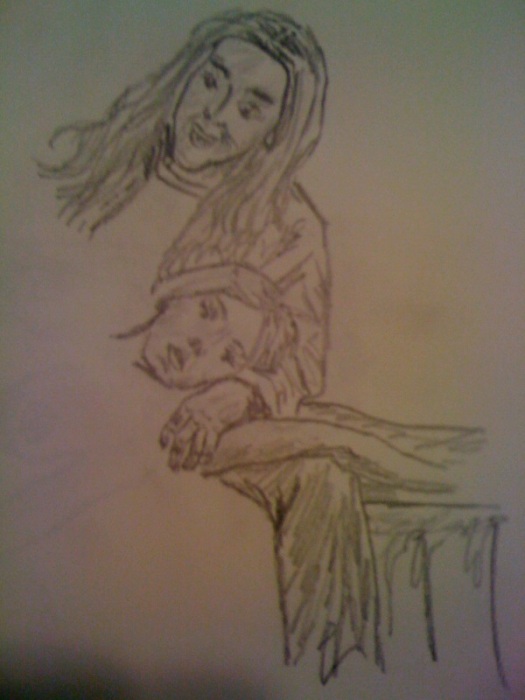 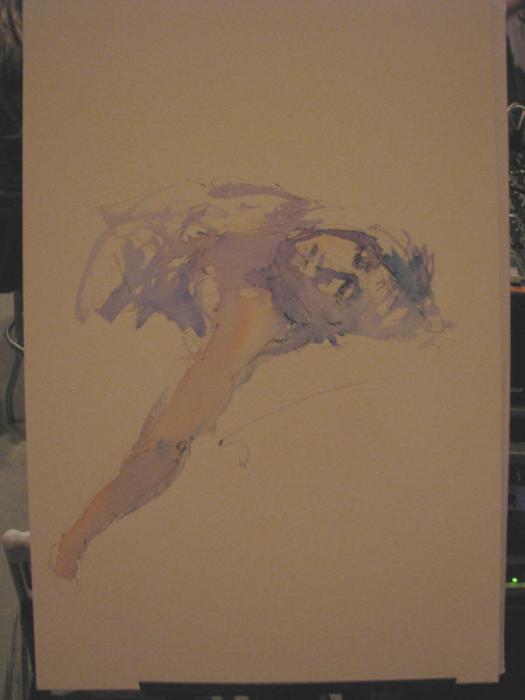 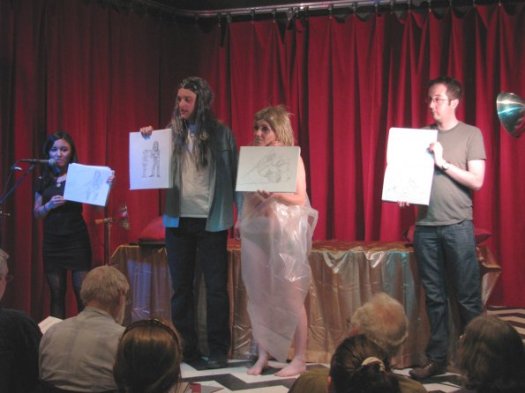 Special thanks to Brian K. who was thoroughly and appropriately disturbing as Bob for a pose or two. 🙂

The next contest was, “What other things are wrapped in plastic?” with the prize being a sketchbook from Artist & Craftsman Supply which is at the corner of Howard and North, basically just across the street, which is pretty damn convenient if you need some last-minute art supplies.

Next up was the artist’s best incorporation of “Fire, walk with me”, the quintessential phrase/key to all of Twin Peaks. 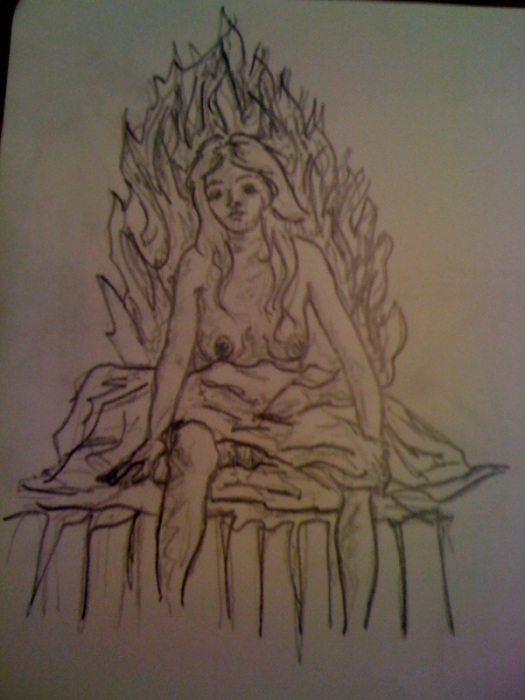 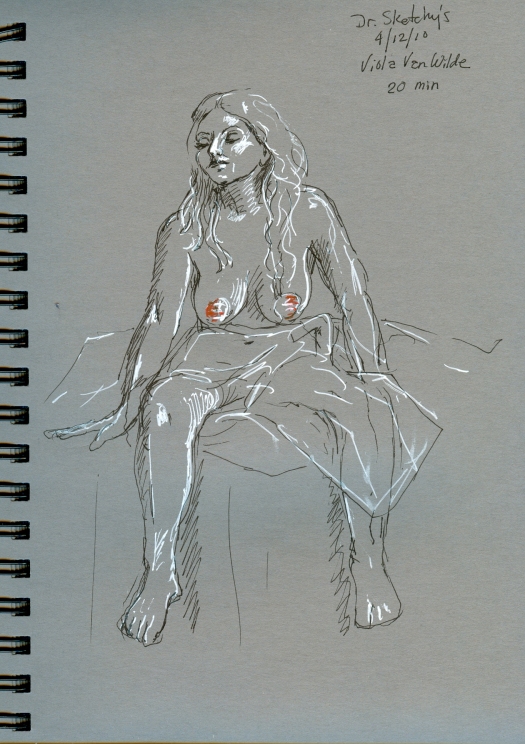 The prize was a Mini-Munny from Atomic Books, on the corner of Falls Rd and the Avenue in Hampden.

BTW, this is a good time to mention that you’ve got about a week left to check out what some local artists have created from these DIY vinyl dolls in Vinylmore 3 : Vinylmore, Munnyland at Atomic Books.  You can see photos of some pieces from this and past shows here, but really, you should see them in person, so don’t miss it. 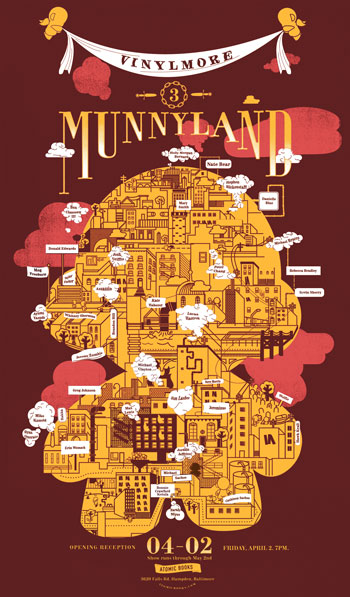 And last up was the artist’s incorporation of “What’s the next TV series we may be paying homage to 20 years from now?”  The prize was Obscene Interiors by Justin Jorgenson from Baby Tattoo Books.  We didn’t get any of those sketches in the mail this time, so you’ll just have to imagine those.

Special thanks to Viola Van Wilde and Brian K. for seriously going above and beyond for this session!  Big thanks as well to our generous sponsors Atomic Books, Artist & Craftsman Supply, and Baby Tattoo Books.  Thanks to Bill for doing door and filming for the Dr. Sketchy’s Baltimore documentary, to Jeff for taking all the amazing photos you see above, and to Russell for helping everyone get sloshed. And thanks to everyone who came out, Peaks geeks and otherwise!

Tonight, April 26th, is a super-duper special session with Miss Cherry Delight, Coney Island’s burlesque confection, who is coming down to Charm City for your drawing pleasure . . . not only that, but there will be free cupcakes from Sweet Sin Bakery!

The flyer is by Alexis, and that amazing photo is by Sherri O’Connor.  Check out the rest of her stunning work.

Oh, keep in mind the door charge is now $8 instead of $7 . . . after two years we finally had to raise it.  Free cupcakes from Sweet Sin Bakery though and Cherry Delight?  What could you possibly be doing on a Monday night that could be better than that?