Understandably, new folks always make us nervous. What if they get lost coming to the Windup? What if they’re a robot built by a rival Dr. Sketchy’s branch intent on a hostile takeover? What if the model doesn’t even exist and we’re being pranked by a T-Rex with an internet connection and someone willing to type for it?*  <– [see comments]

It can be stressful.

Cherokee was amazing – at no point did she transform into a boombox and try to steal our energon cubes nor did anyone get eaten. Just a whole lot of Super Sexy.

Cherokee Rose, along with GiGi Holliday, Roma Mafia, and Sophia Sunday (all past or future Dr. S models) will be performing with Bosley at ArtScape this Friday and Saturday at the Strand. I advise inserting that into your schedule. (But show up early, tickets won’t last.) https://www.facebook.com/nc.chelle/posts/4173968549282?notif_t=feed_comment_reply#!/events/341630882581322/

We had a bunch of drawing contests, with one lucky winner getting the latest issue of Retro Lovely from Atomic Books, another getting Autumn’s Come Undone by Shag from Baby Tattoo Books, and two poor souls getting some mystery concoction from Russell behind the bar.

Thank you to Craig Hankin, Kat Parker, Fred Oakes, Hallsi Rose Killian, Jennifer A Stark, John Schloman, and Tim Kelly, who all sent in drawings, which you can see in the gallery below.

Super duper thanks to Cherokee Rose for being our muse that evening; thanks to our sponsors Atomic Books and Baby Tattoo Books; thanks to Russell for slinging booze and tunes; thanks to Jeff for the photos you see above; thanks to Styger for helping me shove furniture around and run the door; and thanks to Alexis for holding the mic down.

Our next session is SATURDAY, July 21st, at the Windup during Artscape with Valeria Voxx! It’s a special two hour session with a “pay what you want” at the door, minimum of a dollar. There’ll be cold beer, cold air conditioning, and some great drawing. You should come.

Now THAT is obscure.

Anyway, we’re a little late with this blog post, but, well, that’s what happens when a giant storm tears up the East Coast with no fucking warning.  What are you going to do?

In any case, Deviana Fox was, is, amazing.  Take a look.

Thanks to Atomic Books for donating The Great American Pin-Up which some lucky person won in one of the contests, and thank you to What Katie Did for donating a pair of vintage back seamed stockings for another lucky winner.

Thank you to Cecilia Strakna, Clarice Jones, Craig Hankin, David Wright, Kat Parker, Kevin Yan, Lois Borgenicht, Stephanie Burgee, Stewart White, Tim Kelly, and Tom Symonds who all sent in drawings, which you can see in the gallery below.  Y’all sent in ALOT; if I misspelled a name somewhere or misattributed someone, let me know, with that many it’s pretty easy to make a mistake.

Thanks to Deviana Fox for doing a great job, though I am disappointed that none of y’all provoked her into lopping off a head; thanks to our sponsors Atomic Books and What Katie Did for the amazing prizes; thanks to Jeff for some of the best photos he’s ever taken; thanks to Russell for slinging tunes and booze, not to mention letting us use the amazing Windup Space; thanks to Styger for helping shove around furniture and hold down the door; thanks to Alexis mc-ing; and thank you to all the folks who joined us for a pretty amazing 77th session.

If you’re a Mad Men fan and missed last session with Lauren Marleaux of Gilded Lily Burlesque, your life pretty much sucks at this point.  Take a gander.

I wanted so badly to either use the Mad Men theme song or “Zou Bisou Bisou” for that video, but we probably would’ve been sued out of existence if I had.  [sigh]

In any case—wow. Eat your heart out, Joan Holloway.

We had a bunch of contests: the ye’ old opposite hand contest, a “Put a bird on it!” challenge, and best incorporations of John Waters  and Betty Page (who both had birthdays on or around that date), and gave away a giant bottle of Disobedience Abbey Dubbel from Flying Dog Brewery, Sparrow Vol. 0: Ashley Wood Sketches and Ideas from Atomic Books, and Symptomatica from Baby Tattoo Books.

Most of the photos you see are by the talented Jeff Schock, except when they’re labeled as taken by Alexis.

Thanks to the amazing Lauren Marleaux for a rocking Mad Men themed session; thanks to our sponsors for this session, Atomic Books, Flying Dog Brewery, and Baby Tattoo Books; thanks to Jeff for the snazzy photos; thanks to Styger for helping with the door, set-up, and break-down; thanks to Russell and Liz for slinging booze & tunes; thanks to Alexis for manning the mic; and thanks to anyone who helped put up a chair at the end.

Next session is Monday, May 14th with Marla Meringue of Sticky Buns Burlesque!  (It’s our last event before our 4th Anniversary session in June, btw, since we’re taking off for Memorial Day.) If you’re coming, go to the event page and let us know.  Marla’s pretty popular, so show up late at your own risk. 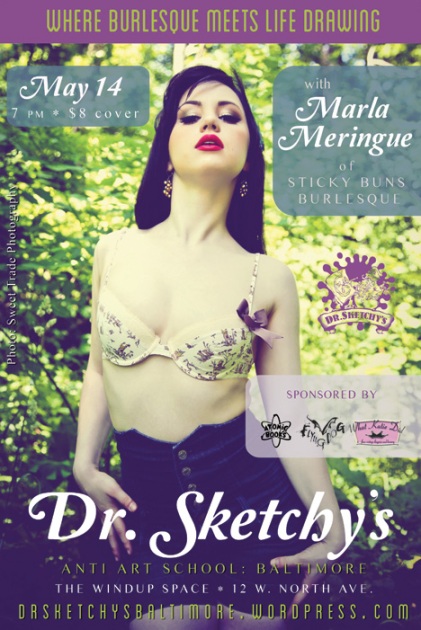