Well, the first Dr. Sketchy’s of the year, with the wonderful Lauren Marleaux of Gilded Lily Burlesque, ended up being the busiest one we’ve had yet.  The break over the holidays was great, but it was nice to be back.  You know, I even missed that crazy drunk homeless lady that tries to barge in every session and grab my beer.  (She didn’t want my beer this time, but she did declare loudly, “I ain’t payin’ 7 dollars to draw SHIT!”)

Though I heart crazy “I’m going to get your beer” lady, she missed out, cause when it came down to it, we were definitely drawing THE SHIT.

From what I could see over folks’ shoulders, there was some serious inspiration going on.  Wouldn’t you be inspired?

While we’re all thinking wonderful things about Lauren, let’s take a second to plug Gilded Lily’s show coming up on February 13th.

We’ll be there.  There’s two shows, 7:30 and 10, $15 for a regular seat and $80 for a table for two with your honey.  We can not stress how damn amazing their shows are.  If you haven’t been to one before, you’re missing a lot of what Dr. Sketchy’s is doffing its hat to.  Our models are amazing, stunning beautiful, but for the most part they’re pretending to be inanimate statues for your drawing pleasure.  That’s not THEIR art though.  They’re performers, damn good ones, and until you see Paco Fish hobble around on stilts or Lucille Lingerhans von Spankenstein crack the whip, you don’t have a full appreciation of who you just drew. 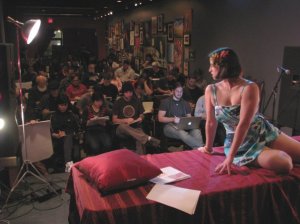 As a side note, at one point in the evening Jen Swanson came up to me and said, “Sppttt!  Aaron!  That guy in the front with laptop?  He’s using his webcam to take pictures!”  Now, if you’ve read the rules in the side bar to the right, or ever been to a Dr. Sketchy’s, you know that pulling out a camera is a serious, serious, no-no.  Our models are being paid to model for art and our promotional images . . . they would rightly demand a lot more for a full fledge photo shoot.  Basically, imagine what happens if you pull out a video recorder in a movie theater or camera in a strip club . . . Bill may be making the official Dr. Sketchy’s Baltimore documentary and doing some of his own drawing, but please don’t make the mistake of thinking he won’t put down his pencil and bounce your ass off the median out front.  If he had a good night’s sleep, you might even hit the front door of the McDonalds.

In any case, I, all flustered, rushed to the front to check out what was going on, laughed, and came back to Jen.  “Jen, that’s not a photo.”

Our second contest of the evening was, in celebration of National Bubble Wrap Appreciation Day, “What’s the most creative way to pop bubble wrap?” 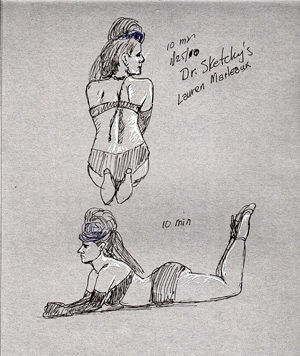 The two winners won a set of Sharpies from Artist and Craftsman Supply across the street at the corner of North and Howard and a Windup Space t-shirt from Russell.

The third contest was the infamous random noun contest, the noun shouted out being “taco”.  You know, after we rejected the first fifteen.  🙂

The prize was a Munny from Atomic Books at the corner of Falls Rd and the Avenue in Hampden . . .

…and Beyond Ultraman: Seven Artists Explore the Vinyl Frontier by the Pasadena Museum of California Art and published by Baby Tattoo Books.

Here’s a couple more photos and drawings to round us out. 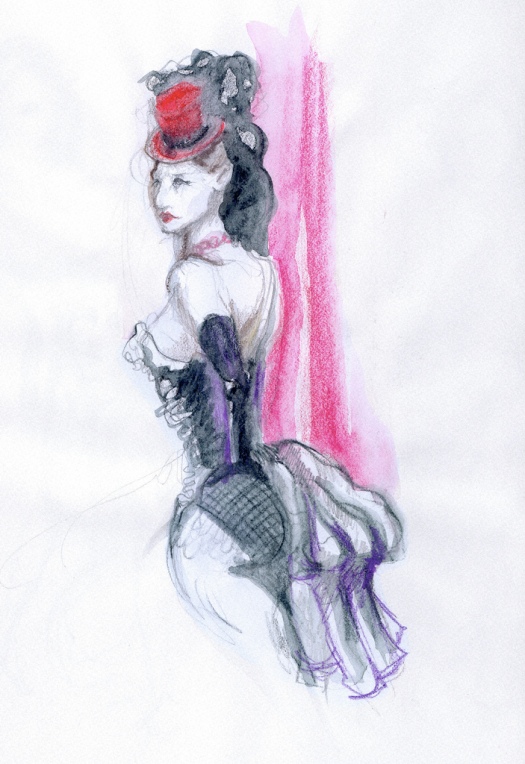 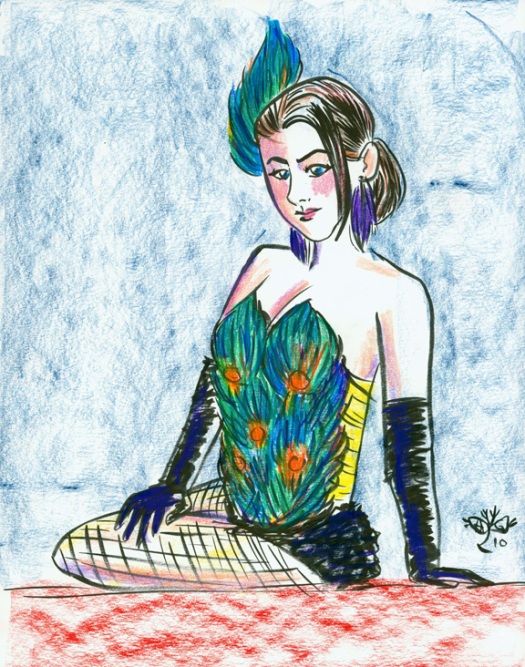 Thank you to Lauren Marleaux of Gilded Lily Burlesque for rocking the stage, thanks to Bill for policing the door and taking footage for the documentary, Jeff and Jen for the amazing photos, Russell for pouring drinks and spinning records (not to mention for the amazing space), and all of you who showed up, retweeted tweets, or wrote nice things on blogs to help us keep this going.  All of you are pretty neat.

Our next session was SUPPOSED to be February 8th with Little Luna, but Baltimore got kicked in the balls by Jack Frost, so our next session will be February 22nd with cabaret singer/songwriter extraordinaire Sabrina Chap.  We’ll reschedule Little Luna as quickly as possible…If I were you, I’d find solace in the Gilded Lily show this Saturday.

One Reply to “Our evening with the marvelous Lauren Marleaux!”