That is easily my favorite photo. 🙂

Viola Van Wilde of Gilded Lily Burlesque broke many hearts, pacemakers, and pencils on Monday, June 8th, which was our one-year anniversary session. Can you believe it’s been one year, that next Monday, June 22nd, will be the TWENTIETH session of Dr. Sketchy’s Baltimore?

I hope you were there, because our sponsors Atomic Books, Artist & Craftsman Supply, and Baby Tattoo Books provided some SERIOUS prizes to win during the drawing contests. Fancy-pancy art books, steel portfolio cases, and shots were RAINING out of the skies! Super thanks to Viola Van Wilde, our sponsors, Dionysus, Jeff for taking photos, and Lindsay, Bill’s girlfriend, who came by on his birthday (yes, Bill shares his birthday with Dr. Sketchy’s Baltimore) to judge a contest for us. 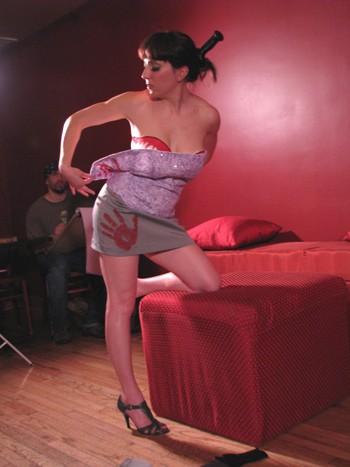 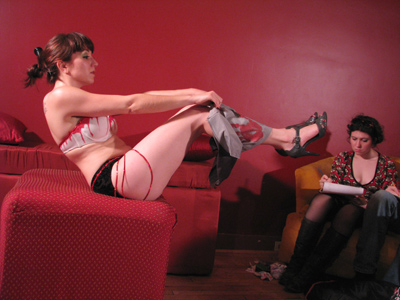 Tell me that’s not a brave pose to hold. 🙂 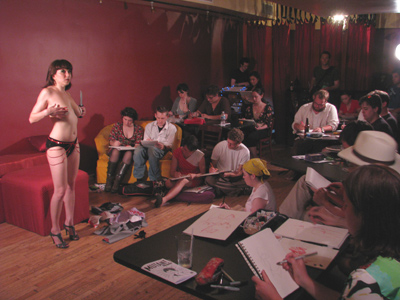 Telling you folks, if you can, get there 15 minutes early to get a seat. We weren’t even able to sit down. 🙂 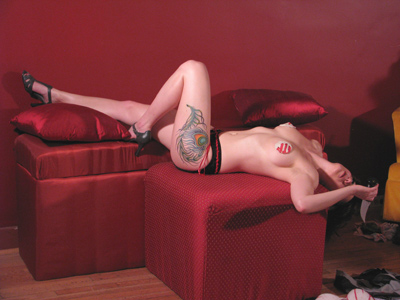 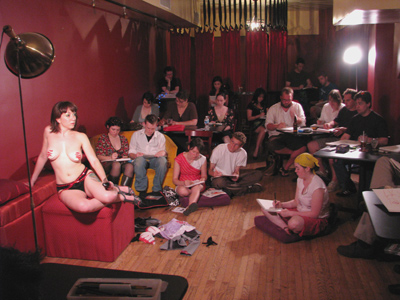 Our first contest was, of course, the “draw with your non-dominant” hand contest (for two shots, cause obviously you’re too damn sober if you’re able to win a contest while drawing with the wrong hand). The second, in honor of Bill’s birthday, was “What does Bill’s girlfriend Lindsay REALLY think goes on at Dr. Sketchy’s?”–judged by none other than Lindsay herself since she and Bill had stopped by even though he wasn’t supposed to.

Some of the entries were DIRTY. Please, please, please send them in. 🙂 All we’ve got is this one pretty photo snapped by Jeff.

If you’ve got one of the sketches that made poor Lindsay gasp, PLEASE email them in.

Those have to be the craziest pasties ever. The third contest was “Where did Viola get the feathers for her pasties?” for one of the two Artist & Craftsman Supply portfolio cases.

Here are two sketches from Brian Dugan . . . the first one is his winning entry for this contest.

[Check out the rest of Brian’s drawings from this session here. If I remember correctly, he’s also the only one who sent us sketches from Viola’s sesison in November, which you can see here. –Alexis]

Here are some sketches from other folks that aren’t contest related . . . 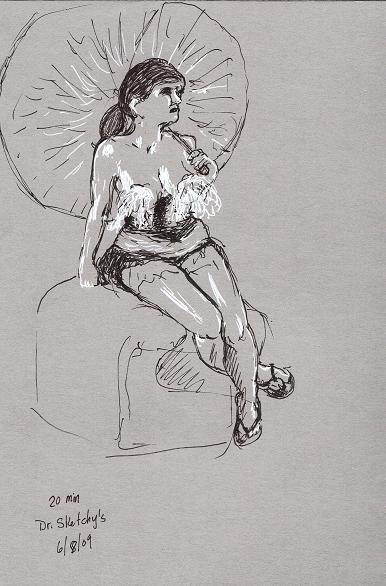 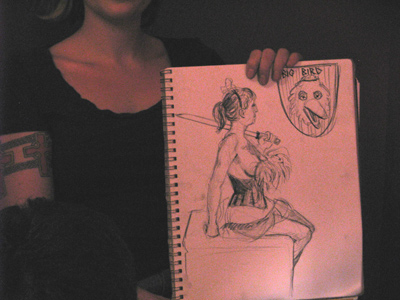 Hmmm. Actually that one was probably from that contest too. 🙂

Oh, and here’s the lucky winner of the giant case from Artist & Craftsman Supply, which we determined by raffle….I don’t think she believed us at first…

The first 25 folks got a free comic from Atomic Books as well, and another lucky soul won the postcard book of Isabel Samara’s On Tender Hooks after proving their prowess with a pencil for the best incorporation of a pop icon.

Someone also won a copy of Gary Baseman’s My Hunger for Venison from our Baby Tattoo Books stash (top center)–we’ll be giving away another one of these books below on Monday…. 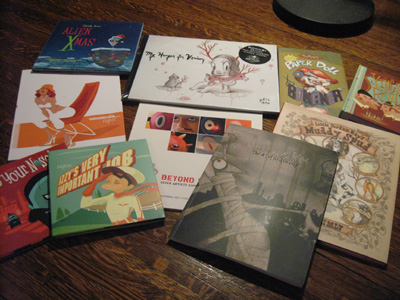 Sugar Ann Spice this Monday, June 22nd, Dionysus, at 7 o’clock! Scroll down for info on her burlesque show at Ottobar on Saturday! Viola Van Wilde, if you’re reading this, I have an email from a lawyer that says you gave his poor client a stroke and we need to get in touch with you. Don’t call though, we think the phones are tapped.