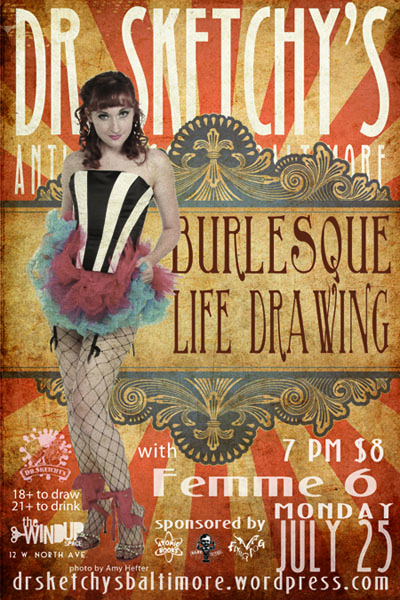 That’s right, this is the last one of the summer!  Alexis and I are going narwhaling the last two weeks of August and Russell is closing Windup for the second week so he can install a merry-go-round or some such nonsense.

That means the whole miserable, sun-blistered month of August will be a drought of Dr. Sketchy’s Baltimore goodness.  Yup, you suckers are on your own.  Well, for a month anyway.

So who’s posing?  Burlesque performance artist Femme 6!  We were going to go with Femme 4 or 5, but well, you’re special, so we went with 6 who’s, like, twice as good as 5 and is rumored to have broke a bottle over the head of 4 the last time they ran into each other.  We’ve seen Femme 6 perform multiple times in Baltimore over the years (at least one of those was Paco Fish’s Viva La Decadence)—she was actually supposed to pose last summer, but she’s only in Baltimore for a small window every year and it didn’t work out.

If you’re curious, check our her artist manifesto on her blog.

We’ll have fabulous booze and prizes from Flying Dog Brewery, Atomic Books, and Baby Tattoo Books.  Doors will open 6, unless I forget to unlock them again, and the whole shebang will kick off at 7 o’clock!

Oh, and apparently we got out a shout-out from BUST magazine.  Tell me that ain’t cool.