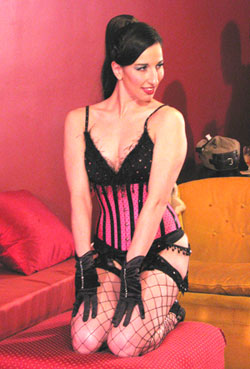 Last night was crazy nuts, in a good way. Apparently Baltimore loves Maria Bella because we had folks showing up at 6:05 and effectively sold out at ten till 7. TAKE NOTE, we seem to be getting a lot of attention these days from the media and web searches, so if you absolutely want to make sure you can get in to draw, make sure to show up early.

We’ll post the rest of the pictures in a few days, but, if you can’t wait and are hoping to catch Maria Bella (and Lucille Lingerhans von Spankenstein, who modeled for us on Jan. 26), check out SIN at Club One this Friday.

Maria, Lucille, and the rest of their Gilded Lily sisters (and brother Paco–almost all of whom have modeled for us in the past) will also be performing at the Creative Alliance on Saturday night for a special Valentine’s Day show. Seriously, folks–if you think Dr. Sketchy’s is fun, you really, really need to check out a Gilded Lily performance.

In any case, Monday was a hectic night. Folks drew a ton of amazing drawings and drank a ton of alcohol if the empties had anything to say about it. My dumb ass managed to drop an entire beer in my lap and had to run home in the middle to change pants and run back. (Out of the bazillion times in the last couple years that I’ve drank 15 shots, 23 beers, ran into a wall, rolled down some steps, and had crawl in the front door of my apartment I’ve NOT ONCE spilled a beer in my lap . . . but the one time I do–sober, mind you–I’m helping host a Dr. Sketchy’s session.)

Oh well, we’re not professional folks…we’re doing this to have just as much fun as you do. If we’re not as tipsy as you by the end of it, we’ve obviously done something wrong. 🙂

There almost wasn’t a session at all last night by the way…apparently God took it upon himself to snap a 30 inch water main in half over on Guilford…a large portion of Mt.Vernon lost water, had their basements flooded out, and spent the afternoon showering at a friend’s house (thank you, Bill). Dionysus doesn’t take shit from the new kid on the block, though, and was able to dodge all that biblical nonsense.

As usual there were some amazing prizes from Atomic Books, Artist & Craftsman Supply, and mysterious shots from Dionysus referred to as “Woo-woo”s (named for the exclamation yelled after drinking them). Don’t know what was in it, not going to ask.

BTW, toward the end we noticed someone had somehow snuck some outside food past us. Please don’t do this, folks…the only thing that makes this worth it for Dionysus to host us is the chance to sell a you few beers and maybe an Autumn Chicken Sandwich. (Oh my God–they’re amazing. Alexis could eat them every night and not get tired of them.) Anyway, for the same reason you can’t take a bag of Taco Bell into the Charleston, you can’t take food into Dionysus. It is a restaurant…and I’m telling ya, if Lynn suddenly cartwheels into the room and beheads somebody with a halberd or something, I’m taking off running and you’re on your own. (So is Bill, Jeff, and Alexis…I’m running.)

We’ll mention this again when we’re a little closer to the next session, along with a couple other things, since honestly, even *I* wouldn’t have read down this far, but I figure I’d toss it in here real quick.

Thankyou to Maria Bella for a stunning performance, our generous sponsors Atomic Books and Artist & Craftsman Supply, Dionysus and company for the foodspacedrink, Jeff for photos, Zak of TuffNerd Productions for taking video (which means we should have some more media on here in a bit:) ), and Bill for handling door and doing all the other stuff Bill does.

Next session is Febuary 23rd with the lovely Lady Vile. Check back in a day or two for the rest of this session’s photos and a flyer for the next one. 🙂