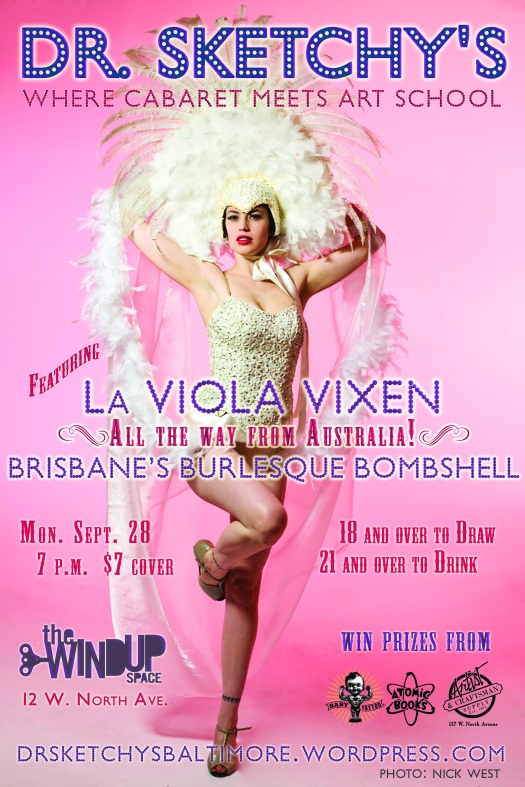 Next Monday, September 28th, Viola Vixen will be posing for your drawing pleasure!  All the way from Brisbane, Australia, Viola is in the states for NYC Burlesque Festival, and because she’s made out of AWESOME, she’s shooting down to Baltimore for the evening – even after her father said, “Baltimore?  What?!  Isn’t that where The Wire was filmed??  Oh my God, you’re going to DIEEEE!!”

7’oclock, doors at 6.  If we’re not slammed to the gills, I’ll be mightily surprised, I’d get there early if you can.

By the way, that simply amazing photo is by Nick West.  Also, if you’re interested in following Viola Vixen on Twitter, you can follow her at @LaViolaVixen. 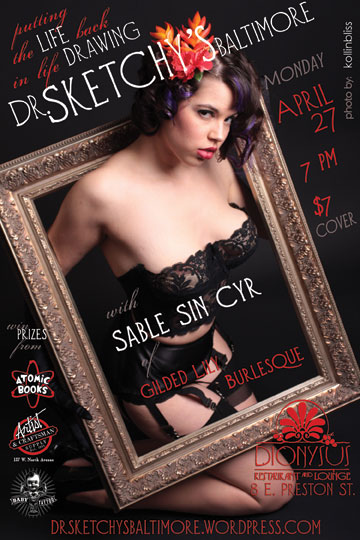 Hope you’ve not forgotten!  If that flyer doesn’t make you want to be there with a sharpened pencil (or paint brush)  ((or markers)) (((or embroidering kit))) then I just don’t know what to say.  Alexis and I rolled in from NYC last night around one in the morning, having spent the weekend at Sketchycon with Molly Crabapple, John Leavitt, and the Sketchy branches of dozens of other cities around the world.  We’re about as fired up as we can get.

By the way, we’ve added our Twitter feed over in the column on the right, so if you want up-to-the-second updates of when the next Sketchy’s is, other interesting things going on in Baltimore (Trixie Little and Evil Hate Monkey are at the Hustler Club this Friday…I haven’t found the details yet, but I’ll look them up for you), how many screwdrivers Alexis drank, or general public announcements like OH MY GOD SWINE FLU IS TOTALLY THE NEW BLACK, well, that’s where all that stuff will be.

What else?  Oh, I hope you went to Glitterama.

For some reason we’re not showing up on their search feature yet, but that’s where we’re at.

Email us at drsketchysbaltimore (at) gmail.com.