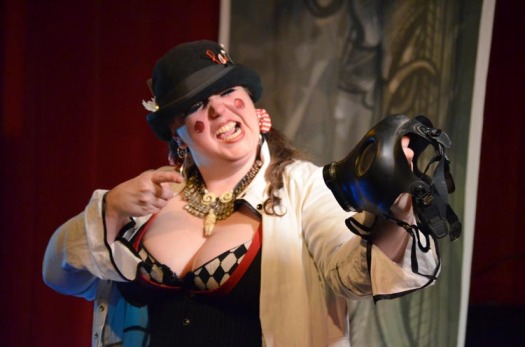 We’ve been wanting to do this particular session with Mab Just Mab—“DC’s  Own Sideshow Girl—FOREVER.  I mean, honestly, when will you get a chance again to draw someone hammering a nail up their nose?  Sitting in the emergency room with your first born child after a particularly ill-advised game of kindergarden Truth or Dare?  I don’t know.  Take a look.

There was tasty beer from Flying Dog Brewery; some lucky souls won Molly Crabapple’s Week in Hell in our “best incorporation of Houdini” contest, and Freaks, Geeks, And Strange Girls: Sideshow Banners Of The Great American Midway in our “best incorporation of William Shatner” contest. Both prizes were from Atomic Books, which, if you didn’t know is the best damn bookstore/comic book shop in Baltimore.

Thanks to Mab Just Mab, for putting on what might have to be one of my favorite sessions of all time; thanks to this session’s sponsors, Atomic Books and Flying Dog Brewery; thanks to Jeff for the amazing gallery of photos you see below (and one above); thanks to Russell for slinging booze and tunes; and thanks to Alexis for emceeing the whole thing.

And special thanks to all the artists who contributed artwork for this recap: Cecilia Strakna, David Wright, Jeff Lance, Mike Hasson, and Stewart White.

Our next session is Monday, April 9th with Eyrie Twilight of Black Tassel Boolesque.  Doors at 6, start at 7 – get there early to get a good seat.  It’s going be a neo-Victorian/steampunk-esque extravaganza.