On October 12th we had, for the drawing pleasure of all, the extraordinarily versatile Paco Fish of Gilded Lily Burlesque, host of Vive la Decadance!, organizer of Independent Practice at Load of Fun on Wednesdays, and, well, a bazillion trillion other things.  (Not only that, but his Facebook page is a pretty damn good way to find out what’s going on around town any given week if your tastes tend to veer toward vaudeville and burlesque.)

Now, prepare yourself for some sizzling shots of Paco:

We know there are those out there that are like, what, no boobies? But really, we true artists also appreciate the male form. Paco could easily have been in some painting of a religious or mythical scene by one of the old masters. (Well, if they had sequined heart pasties and gold lamé hot pants back in those days.)

BTW, all of Gilded Lily Burlesque, Paco included, will be performing this coming Saturday, Halloween night at Load of Fun from 10 to midnight.  It’s going to be an amazing show, we’re going.  Get your tickets here before they sell out.

After the show, check out the Heroes and Villians Costume Ball being thrown a block away by the Windup Space (our wonderful  home) and Atomic Books (one of our generous providers of awesome prizes). Seriously, Station North is the place to be for Halloween this year, instead of being crammed in some random Fells Point bar, getting your eye nearly poked out by some girl with fairy wings from Hot Topic, and having to plan your pee trips way before the urge even arrives because it’ll take you forever to shove past half a dozen Michael Jacksons and whatever else the hot costume of the season is, to get on that long-ass bathroom line.

Wait, where were we? Oh, drooling over Paco’s very Baroque sexiness…

From an angelic Cupid to a glam-tastic Jesus Christ, to whom MJ apparently lent his glove.

Here’s a couple sketches….the first is from Mike Hasson….he gave us a couple sketches to scan in, unfortunately a few of them were larger than our scanner, so you’ll notice some cropping.  If we get some better copies, we’ll come back later and replace them. 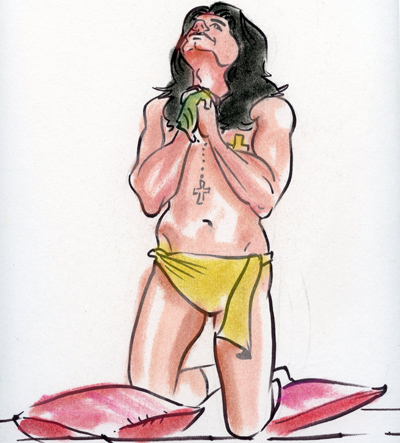 …and this one is from Brian Dugan….

Next was the random noun contest, in which we ask the audience to call out the first person, place, or thing that comes to mind, the most interesting of which we ask them to then incorporate into their drawings. Thus, for this session, “Best incorporation of an iPhone app,” the prize for which was Kings of the Road by Ragnar from Baby Tattoo Books.

Here’s an entry by Brian Dugan… 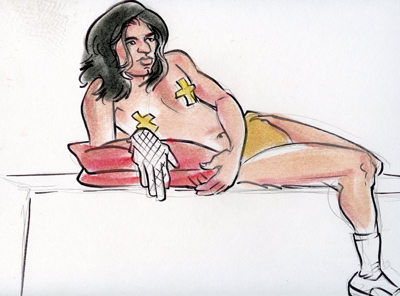 The prize was the Color Ink Book Volume 3 by Brothers Washburn from Atomic Books, who by the way has revamped their website, which looks pretty slick.

Kurt Aspland‘s entry for this contest:

And Mike Hasson’s depiction of Paco… as He Who Shall Not Be Named?

Special thanks to Atomic Books, Artist & Craftsman Supply, and Baby Tattoo Books for being our generous sponsors and providing prizes for all of you to win.  Not only that, but thanks are owed to Russell of the Windup Space for slinging drinks, Bill for holding down the door and filming video for the eventual Dr. Sketchy’s Baltimore documentary, and Jeff for the fabulous photos through out this post. And a ton of thanks, of course, for our supernaturally spectacular muse of the evening, Paco Fish!

Our next Dr. Sketchy’s is October 26th….TONIGHT with Dahlia Derriere in a tribute to Edgar Allan Poe! 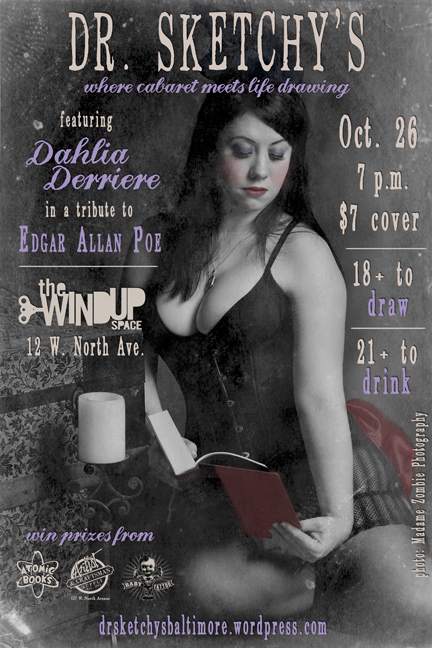 I usually pick what I think is the best picture for the lead photo . . . had a lot of trouble trying to figure out which one to go with this time.  La Viola Vixen, Brisbane’s Burlesque Bombshell, was absolutely gorgeous (even though we all got caught in a serious downpour shortly before the show), and Jeff really outdid himself with the photos.

So there’s probably going to be a few more photos than usual.  I just couldn’t decide between them.

Anyways, buckets and buckets of thanks to Viola Vixen for traveling from NYC (and, even further, Brisbane before that) to model for us.  Thanks also to our generous sponsors Atomic Books, Artist & Craftsman Supply, and Baby Tattoo Books; Bill for helping us pick her up at the bus stop and watching the door, Jeff for photos, Russell of the Windup Space for keeping our whistles wet and letting us shove around his furniture, and Viola Van Wilde for helping us show Viola a little bit of Baltimore the next morning before she had to head back to NYC (not to mention offering to put Viola up for the night, even though we didn’t take her up on it and ended up going out to get soused afterward instead:). 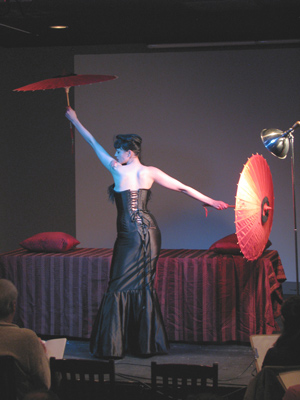 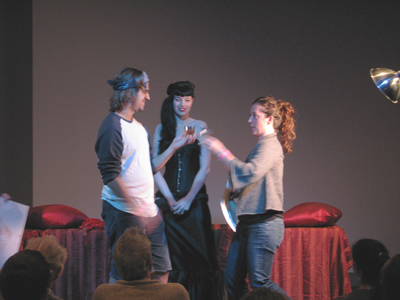 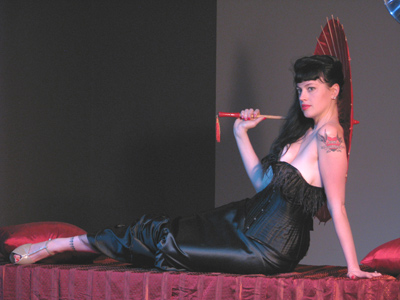 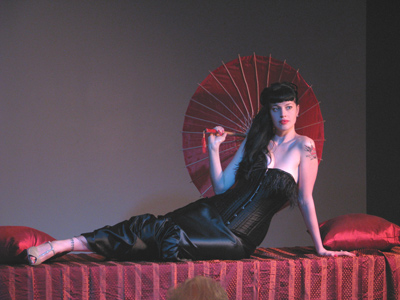 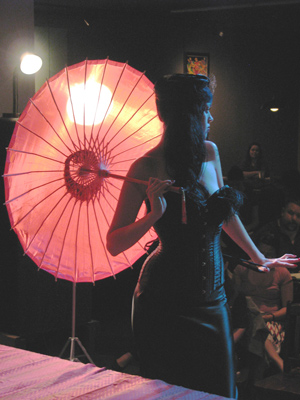 The second contest was the random noun contest where someone in the audience shouts a random noun to be incorporated into the picture.  “Mousetrap” ended up winning out.

The prize was a package of pastel paper from Artist & Craftsman Supply on the corner of North and Howard streets. 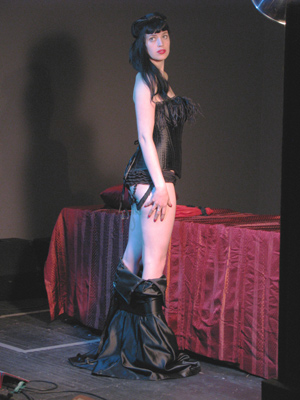 Here’s some sketches Brian Dugan sent in . . . he’s got some more up here as well.

The third drawing contest was to illustrate Viola in Times Square since the New York branch was at the moment holding a special guerrilla Dr. Sketchy’s in Times Square (and apparently was dealing with the monsoon we’d tussled with earlier).

Here’s Brian’s sketch from that contest… 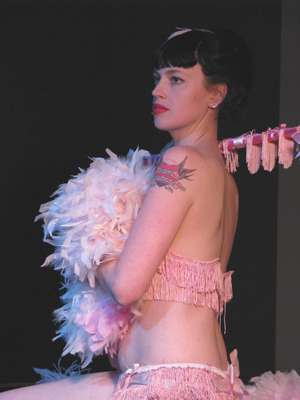 The last contest was the best illustration of the most bizarre mode of transportation from Brisbane to Baltimore.  Here’s Brian’s…

The winner received a copy of The Indie Rock Coloring Book from Atomic Books.

Once again Viola Vixen was amazing, even if our livers might have been a little worse for wear the next day.

Our next session is tonight, Monday, October 12th, 7 o’clock at the Windup Space with Paco Fish!